LAGUNA Golf Lăng Cô, the award-winning golf component at the Laguna Lăng Cô integrated project in Central Vietnam, has become the first fully operational course in the world to be elevated into a new elite category by its designer Sir Nick Faldo.>The British legend, a six-time major winner and prolific course architect, sees Laguna Golf Lăng Cô as his flagship layout in Asia. Opened in 2013, the stunning course makes full use of the property’s amazing location sandwiched between the ocean and the mountains, with play incorporating rice paddies, jungle and coastal holes.
The track has earned widespread acclaim over the years, garnering numerous awards and cementing itself as home of the annual Faldo Series Asia Grand Final — one of the world’s most respected showcases for young players. News that the layout has been named a Sir Nick Faldo Signature course is sure to further enhance its appeal to golfers. The new Sir Nick Faldo Signature category will only be applied to Faldo courses, both existing and forthcoming, that match then maintain their designer’s famously exacting standards across a range of markers including sustainability, conservation, and quality of design.
*“Being elevated in status like this really speaks volumes of our ongoing commitment to realising Sir Nick’s vision,”* said Adam Calver, Director of Golf at Laguna Golf Lăng Cô.
A mantra of continual improvement has been ingrained at Laguna Golf Lăng Cô under the stewardship of Calver. And it is this philosophy that has helped it secure its position as one of Faldo’s most lauded masterpieces.
Calver and his team have made numerous improvements to the layout in recent times. New tees have been added, providing alternative challenges for golfers. Trees have been cleared on the coastal holes, opening up views of the beach and the East Sea. Also eye-catching has been the introduction and reintroduction of rice paddies on the course, with four hectares of rice fields right in the middle of the course tended to by a family of water buffalo who act as “bio-mowers”.
*“From the first time I came here when it was still jungle almost 10 years ago, I’ve always considered it a unique place,”* said Faldo. *“We knew the course was going to be different and special because you play through different environments. You go through the rice fields to the jungle. Then we’ve got beach and river and rocks. It really is a special course, with a memorability factor that is sure to keep golfers interested.”* Laguna Golf Lăng Cô is part of Laguna Lăng Cô, one of the most far-reaching integrated resorts in Southeast Asia. The 280-hectare community, which marks the first project in Vietnam for Banyan Tree Group, is framed by jungle clad mountains and a three-kilometre beach running alongside the East Sea.
Laguna Lăng Cô echoes the sustainability ethos of Laguna Phuket, Banyan Tree’s flagship integrated resort community in southern Thailand. In addition to Laguna Golf Lăng Cô, the development includes Banyan Tree and Angsana branded hotels and spas, private villas and residences, convention facilities and a plethora of recreational activities for guests of all ages.
**To find out more about Faldo Design visit:** http://www.faldodesign.com
**To find out more about Laguna Golf Lăng Cô, visit:**
http://www.lagunalangco.com 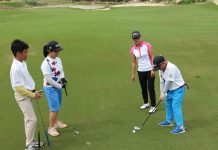 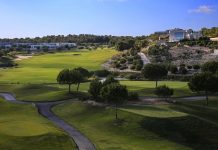 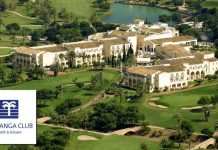 Get sporty at La Manga Club with sizzling summer savings